This article previously appeared in The Gristmill, No. 89 December 1997

Planes, Spokeshaves and a Scraper

At the June 1997 semi-annual M-WTCA meeting in Peoria I exhibited a group of tools that can be referred to as Knowles-type tools. The exhibit generated a number of comments, quite a few of which indicated that most viewers had never seen what is called a Knowles-type spoke-shave. There were also some questions and more than one suggestion that I write a related article for the Gristmill.

The term Knowles-type stems from the design that was patented by Hazard Knowles of Colchester, Connecticut in 1827. I have never had an opportunity to read the entire written specifications for that patent but, to the best of my knowledge, no mention of shaves was included.

My comments are based on observations, analysis and some supposition. It would only be a guess to say that Knowles intended that his design would be applied to other tools but, based on available information, it would appear that the design and possibly the rationale were not only accepted by tool users of the times, they were adapted to other planes and other tools made by different tool makers.

The tools other than planes incorporated the basic ideas of the Knowles patent: namely an iron body (…”that would not wear out like wood-body shaves.”) with the cutter held in place with a wood wedge fitted into channels.

There is no evidence or documentation known that verifies that Knowles himself made planes nor is it known if he had someone else make planes of his design but it is known that such planes were actually made and, most probably, under his supervision in some way. Knowles’s occupations, wagon maker and machinist, suggest that he probably had the functional understanding, the technical knowledge and, quite possibly, access to the resources to make such tools but the actual maker or makers of the earliest examples remains unknown.

Roger Smith has provided the most information about Knowles and the subject of who made Knowles-type planes in his books Patented Transitional & Metallic Planes in America, Vols. I & II. Although Smith’s writings do not mention anything about Knowles-type shaves, they have provided some basis for conjecture, especially as to where such shaves may actually have originated.

As of this writing, I believe that there were at least two distinctly different makers of the shaves in question. I base this theory on the following observations and comparisons.

There are basically two different styles of Knowles-type planes and spokeshaves that exhibit similar characteristics to one another. One type, believed to be the earlier, more closely reflects the design shown in Knowles’s patent drawings.

Smaller planes of this design, such as what are known as smooth planes and block planes, have a chamfer around the opening in front of the blade. One style of spokeshave has similar such chamfers. The wedges in the shaves are also quite similar to those in the smooth planes both in the shape and the species of wood used.

The other type reflects the designs more readily associated with the planes believed to have been made by the Savage Manufacturing Co. of Maryland. Another possible maker of the box-style shave may have been C. S. Irwin & Co. reportedly located in Pennsylvania.

That design may be described as having a box or enclosed pocket through which the blade passes. The wedge is still inserted into tapered openings located on either side of the box but, unlike the earlier type design, the box is somewhat closed across the front. Spoke-shaves representing the second design are completely closed across the front of the box.

The examples of the second design were also more refined in respect to the final surface, finish and shape. They appear to have been machined more than the earlier type, which appears to be a more direct result of casting.

A third tool that can also be classified as a Knowles-type was also included in the exhibit previously mentioned. Some may refer to such a tool as a pull scraper as the angle of the blade is actually between that of a scraper and a plane. The tool may be pushed or pulled, depending on the position of the 16 3/4″ long handle which is reversible. The overall length is 211/4″ when laid flat.

The iron body of the tool can be compared to the box-style design similar to the second type of Knowles-type shave. Judging from the overall appearance of the tool, it may have been made by a completely different maker and at a somewhat later date but it is worth mentioning for the purpose of pointing out the diversity that evolved as a result of, or in addition to, what are now commonly called Knowles-type tools.

All of these tools are made of iron and have a wedge secured cutter. None of them are marked “Knowles” but they all have “the look.”

The chamfers on the flat style are actually different. So too are the pocket, or box, areas of the box-style shaves. The wedges are also different when compared with the other shave of a similar design but there are striking similarities when compared to the wedges in the other style and when compared to known Knowles-type smooth planes that are been studied.

The cutters all have angled comers but none have any distinguishing or identifying makers marks as usually found on plane irons. 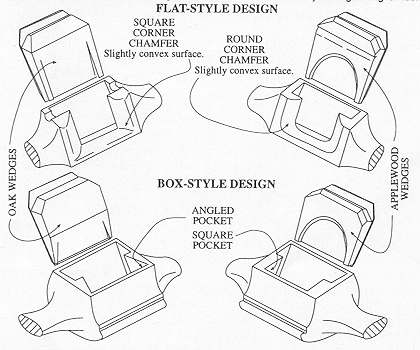 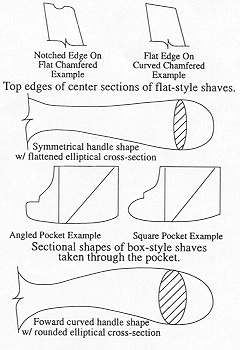 The Knowles-type scraper depicted consists of a cast-iron box with a 16 3/4″ pivoting wood handle attached to the box by means of a two-piece bridle made from iron banding. The extended length of the scraper is 21 1/4′. The sole of the scraper is approximately 3″ square. The 2 1/8″ wide cutter is held in place by means of a wooden wedge.